Puri’s famous Jagannath Temple holds a prominent place of importance for devotees. It is one of the Char Dham pilgrimage sites in India and is also well-known for the annual chariot festival or Rath Yatra.

The Story of Lord Jagannath

The Shree Jagannath Temple is a Hindu temple of Jagannath, a form of Vishnu, in Puri in the state of Odisha on the eastern coast of India.

But how the Jagannath Sanskriti started in Puri? From where Lords were placed and worshipped in the temple? What is Brahma Padartha that keeps the Gods alive? There is a story behind it.

It is said that in the Madhya Bharat, also known as Malwa Union, an Indian state in west-central India, a king lived. The King, Indradyumna lived in a place named Avanti.

He was one of the greatest devotees of Lord Vishnu. Once, a rishi (a sage) visited the king and informed him about the “Bhavya roop” (gorgeous form) of Lord Vishnu being situation in Odisha.

The name of the Bhavya roop is “Nila Madhava”(Blue Vishnu). But he did not say the exact location of Lord Neela Madhava in Odisha.

Therefore the King addressed his Sena(army) to look for the place and find the Lord Nila Madhava. Many years passed they got failed in finding it. Then king decided to go by himself and search for the Lord. He faced many difficulties but was unsuccessful to find the place where the lord stayed.

He got disheartened and devastated after he failed drastically so he decided to take his own life. But to the rescue, one of the members of the Rajya Sabha, Vidyapati, took up the responsibility to find God by hook or by crook. He promised the king that he would not fail him and definitely do the need.

After wandering in many places, Vidyapati reached the forest in Savar-dwipa on the bank of the Mahanadi where a troop lived called Sabara. There he took shelter in the house of the King of Sabara people named Vishwavasu.
He married his daughter Lalita. After staying there for a while he noticed some peculiarity in his host’s behavior. Every dawn, Vishwabasu would go out and on the next day at about noon, he would return to the house scented with various fragrances such as camphor, musk, and sandalwood.

Vidyapati inquired from his wife about it and she informed him that her father would go out to a secret place to worship Sri Nilamadhava.

After that day, Vidyapati’s joy knew no bounds. Lalita had been ordered by her father not to tell anyone about Sri Nilamadhaba but she overstepped that order by telling her husband.
Vidyapati immediately became eager to see Sri Nilamadhaba and finally one day by the repeated request of his daughter, the Sabara Vishwavasu covered the eyes of Vidyapati and took him to see Sri Nilamadhaba keep the path to the Nila Madhava as a secret. 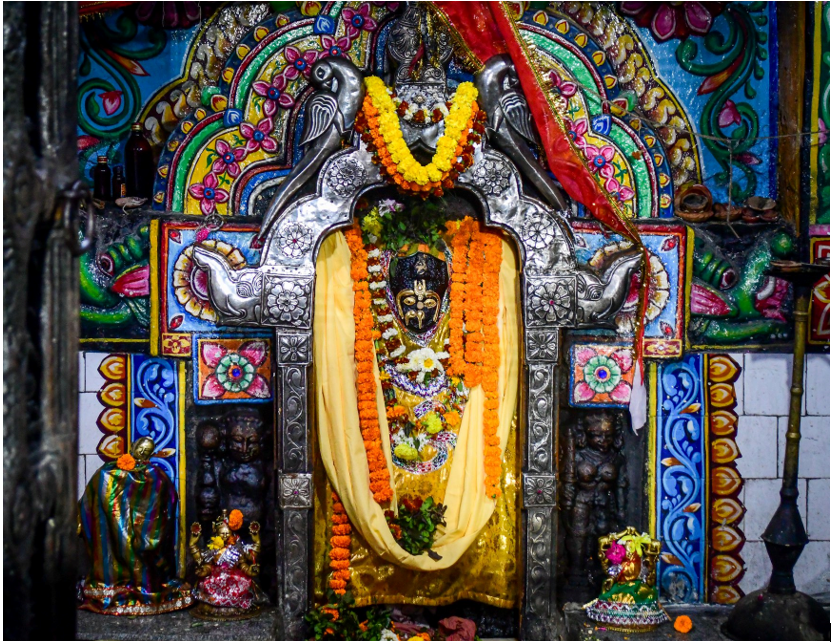 As they were leaving, Vidyapati secretly hid some mustard seeds in the border of his cloth and so while passing on the path he threw them down to mark the way. When they reached Sri Nilamadhaba the Sabara removed the blindfold and Vidyapati seeing the unprecedented beauty of the Deity of Sri Nilamadhaba, began to dance in ecstasy and offer prayers.

Vidya Pati then immediately went to King Indradyumna and informed him of the discovery.
The King in great ecstasy went forth with many people to bring back Sri NilaMadhava. From the mustard seeds thrown along the path by Vidyapati, small plants had grown. So by following these plants the King was able to trace the path to Sri Nilamadhaba.

When they reached the spot, however, they did not find Him.

The Creation of the Lord Jagannath

Not being able to see the beautiful form of the Lord, King Indradyumna felt discouraged and sad. Deciding that his life was useless, he lay down on a bed of grass being determined to give up his life by fasting.

At that time Lord Jagannatha spoke to him in a dream as follows: “My dear King, don’t be anxious. I’ll come floating in from the sea in My wooden form as Daru-Brahma. The voice instructed the King that he should go and bring a wooden piece known as “daaru”(log) and use it to construct the god which is now known as Lord Jagannath.

The King then went to that place and saw on the shore a huge piece of wood marked with a Sankha, Chakra, Gada, and Padma.

To carve the Deity of Lord Jagannath from the Daru-Brahma, King Indradyumna called many expert sculptors. None of them was able to touch Daru.

For the construction of the deity, Vishwakarma (is a craftsman deity and the divine architect of the gods) came and offered to construct the deities in disguise of an old man.

He made the King believe that he will be able to do the job. He kept a condition that he needs a completely silent room with no disturbance. No one would disturb him for a series of 21 days.

The King promised that the sculptor would reside alone and the King would not open the doors of the temple even slightly before the twenty-one days were up. After fourteen days had passed the King was unable to hear the sounds of the artist’s tools and so he became full of anxiety.

Although his minister, again and again, forbade him, the King on the advice of his Queen Gundicha by force opened the door of the temple with his own hand.

The Disclosure of Shri Jagannath

Inside, the King did not find the old sculptor but instead he saw that Daru was manifested in three forms, as Lord Jagannatha, Lord Balabhadra, and Subhadra with Chakra Raj Sudarshan.

Going forward in front of these three Deities, he saw that Their fingers and toes were unfinished.

The King’s wise minister then informed him that the architect was none other than Lord Jagannath Himself and that because the King had broken his promise by opening the doors seven days too soon, Lord Jagannatha had manifested Himself in that way.

These are the deities who reside as Lord Jagannatha, Lord Balabhadra, and Subhadra with Chakra Raj Sudarshan and are worshipped in Shri Mandir.

It marks the demise and rebirth of Lord Jagannath at Puri.
Construction of the lords is done once again by bringing the daaru (log).

At this time some of the special and important Priests blindfold themselves and wrap-around red cloth to their hands. They enter and go near the deities; emanate something (Rahasyamaya) mysterious from the old deities and puts it in the newly constructed deities.

That particular strange thing is known as “Brahma Padartha”. Brahma gives the sign of life. Like every living being has a soul, the same way the lords have Brahma.

There is still a mystery about Brahma. Many do not believe it, many give their own interpretation about it.

Also, read about the Lords getting sick at the time of Snana Yatra

The Courage to Be Disliked Book Summary

Who Will Cry When You Die By Robin Sharma Summary

IKIGAI THE JAPANESE SECRET TO A LONG AND HAPPY LIFE SUMMARY

The Rudest Book Ever by Shwetabh Gangwar | Summary

You may have missed

Everything about Mahatma Gandhi || Summary

How to Stop Worrying and Start Living by Dale Carnegie

AS A MAN THINKETH BOOK SUMMARY