On the day of the Snana Yatra (which means the Divine Bathing festival, in Sanskrit), the idols of the deities are brought out in a grand procession from the “garbhagriha” (sacrosanctum ) to the “Snana Bedi” (bathing platform). Devotees come to view the deities.

The Snana Yatra is a bathing festival of deities celebrated on the Purnima (full moon day) of the Hindu month of “Jyeshtha”. It is the auspicious birthday of Lord Jagannath.

It is an important festival for Hindu dharma. This is the first occasion in the year as per the Hindu calendar. The deities Jagannath, Balabhadra, Subhadra, Sudarshana, and Madanmohana are brought out from the Jagannath Temple (Puri) and taken in a procession to the Snana Bedi. They are ceremonially bathed and decorated for a public audience with the devotees.

The deities are bathed with 108 pots, of ritually purified water drawn from the northern Suna Kua “golden well” of the temple. Later that day, at the conclusion of the bathing ritual, Jagannath and Balabhadra are dressed up in elephant headgear representing the God Ganesh. This form of God is called the ‘Gajavesha’. 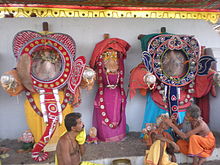 The deities took shower with 108 pots of holy water blended with Chandan (sandal), Jaba (whole rice), Haridra, flowers, Aguru, Benachara, aromatic herbs, and perfumes on the Snana Mandap, situated to the north-east of Ananda Bazar, followed by all the rituals by the servitors and priests.

The devotees witnessing the sight were performing kirtans, beating various musical instruments including jhanja (cymbal), mrudangam, Turi, and blowing the conch shells outside the boundary wall.

After bathing of the deities

After the Snana Yatra, the Gods are traditionally believed to fall ill and are kept in a sick room to recover from illness in privacy under the care of the Raj Vaidya(Doctor). During this period known as “Anasara”, the Gods cannot be seen by devotees.

Anasara means a 14-day period during which the three deities of the temple, Lord Jagannath, and his siblings Lord Balabhadra, and Devi Subhadra are confined to the Sanctorum because they suffer from a fever after the festival of Devasnana Purnima.

At this time three “Pata Chitra” paintings are displayed for devotees to view instead. It is said that with the Ayurvedic medication administered by the Raj Vaidya the Gods recover in a fortnight and resume giving an audience to their devotees.

The bathing of the idols leads to the colors getting washed away. Hence, they are again intricately painted and dressed on the 16th day and take their places on the Ratna Singhasan for darshan by devotees before proceeding for the Ratha Jatra.

The Power Of Silence

How to Learn Anything

How to launch EC2 instance

The Power of Patience

The Power of Now

So good they can’t ignore you

You are a Badass At Making Money

The Forty Rules of Love Summary

The Norwegian Wood by Murakami Summary

The Book Of Five Rings Summary

THE QUICK AND EASY WAY TO EFFECTIVE SPEAKING

3 Minutes to Change your Life – Awaken The Giant

10 Ways for the Motivation: Change Your Life Forever

You may have missed

The Garden of Forgotten Wishes by Trisha Ashley

What is do-while loop in C Programming ? Loops